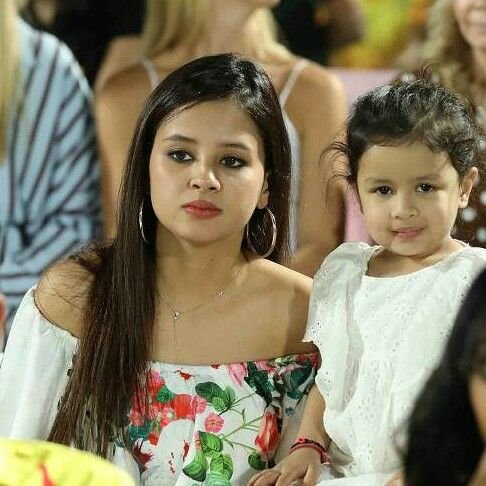 Sakshi Dhoni Biography: A resident of Dehradun,Sakshi Singh Rawat had come into the limelight after she tied the knot with the then most eligible bachelor of India MS Dhoni. Sakshi Dhoni is well known as the wife of former Indian cricket team captain Mahendra Singh Dhoni.  Like Dhoni, Sakshi(Ms Dhoni Wife) also mostly stays away from the press. However, she is often caught on camera during the IPL season as she is seen supporting her husband and her team. She was dragged into the IPL match-fixing scandal due to her frequent appearances in ‘Chennai Super Kings’ matches but nothing could be proved against her and she handled the entire episode very decently.

Sakshi Singh Rawat(MS Dhoni Wife) was born on November 19, 1988 in Lekhapani town of Tinsukia district of Assam, India. At that time her father R.K. Singh was working in the ‘Binagiri Tea Company’ of the Kanoi Group. Her mother Sheela Singh is a homemaker. Later her entire family moved to Dehradun as her grandfather was working there as a Divisional Forest Officer. Sakshi grew up in Dehradun along with her brother Akshay and sister Abhilasha.

Sakshi has completed her early education in Lekhapani. In Lekhapani now famous Bollywood actress Anushka Sharma was a classmate of Sakshi Dhoni(MS Dhoni Wife Education). Later,Sakshi continued her education at Welham Girls School in Dehradun and later completed her schooling from Jawahar Vidya Mandir situated in Ranchi. She also has a degree in Hotel Management from the Institute of Hotel Management, situated at Aurangabad. She had also completed her internship at Taj Bengal in Kolkata where she First met MS Dhoni.

At Taj Bengal in 2007,Sakshi and MS Dhoni met each other where Sakshi was doing her hotel management internship. Interestingly, both Dhoni and Sakshi studied in the same school in Ranchi, although Sakshi was Dhoni’s junior in school, so she never met Dhoni during her school time. Their real love story is slightly different from the story shown in the biopic of Mahendra Singh Dhoni. They met at the hotel as shown in the film but were introduced to each other by the manager and their common friend Yudh Jeet Dutt.

Yudh Jeet Dutt was the person who had organized a farewell party for Sakshi as it was the last day of her internship in the hotel. Dhoni had also been invited by Dutta before the party and that is how they met for the first time. Dhoni took her number from Dutta and started messaging her. Sakshi initially ignored the messages, thinking it would be a prank played by her friend. But when she came to know about the truth, she was completely stunned. They eventually ventured into a romantic relationship in March 2008.

On 3rd July 2010, engagement ceremony of MS Dhoni and Sakshi Dhoni was held  at ‘Hotel Saksham’ in Dehradun. Their marriage took place two days later at ‘Vishranti Resort’ near Dehradun. Many of Dhoni’s friends from the sports, politics and film fraternity attended the wedding and blessed the couple. During wedding Sakshi wore a beautiful red and green lehenga designed by Sabyasachi Mukherjee.

Sakshi Dhoni and Mahendra Singh Dhoni had a daughter named Ziva Dhoni. Ziva Dhoni was born on 6 February 2015 in Ranchi. Who became an internet sensation at a young age. She was born when the Indian team was preparing to win their World Cup title in Australia under the leadership of Mahendra Singh Dhoni. In such a situation, 39-year-old MS Dhoni did not get an opportunity to spend time with his daughter as he was busy trainning with team India.

Anushka Sharma was born in Uttar Pradesh to Colonel Ajay Kumar Sharma who was an army officer,who had to migrate to different places including Assam during their childhood. Sakshi Dhoni’s early education was also done in Assam. However, later Sakshi Dhoni’s family moved to Dehradun as her grandfather was working there as a divisional forest officer. She grew up in Dehradun along with her brothers. Sakshi continued her education in Dehradun school and later completed her schooling at Jawahar Vidya Mandir in Ranchi. Anushka Sharma and Sakshi Dhoni were classmates and appeared in a picture together in childhood school days.

In a controversy related to IPL match-fixing, Sakshi Dhoni’s name was in the headlines. After the IPL match-fixing card surfaced, her picture sitting with Vindu Dara Singh in an IPL match started circulating. Vindu was being investigated for his involvement in match-fixing. However, nothing was found against Sakshi in the investigation and her name was cleared from the buzz created by Media.

Butter chicken is a favourite dish of Sakshi Dhoni.
Sakshi also loves cooking.
There is also a foundation run by Sakshi Dhoni, its name is ‘Sakshi Rawat Foundation’ which takes care of orphan children.
Sakshi Dhoni and Anushka Sharma completed their studies from the same school.
Sakshi Dhoni is also a dog lover, she has four or five dogs. MS Dhoni’s manager,Yudajit Dutta introduced Sakshi Rawat and MS Dhoni to each other.